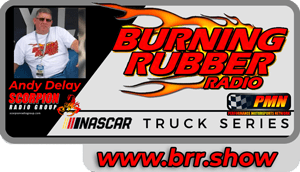 Available on your favorite Podcaster

The Nascar Burning Rubber Radio Truck Series features very close and competitive racing for the average oval racers looking to improve their race-craft. Arrive and drive while experiencing close action packed racing with a lot of side by side racing. Races are longer than the iRacing series counterpart with 60% fuel, making for pit stops and planning race strategy. Series places an emphasis on drivers practicing good race-craft skills. If you love truck racing, then this is your series.

Laps Needed To Lower Your IPL Is Based on Total Incidents Divided By Total Laps Completed Raced. It is not possible to determine how many laps it takes to lower your IPL by 0.001. It changes by the number of laps you complete.

If you quit a race prematurely, you will not lower your IPL, so It is to your advantage to run as many laps clean laps as possible to lower your IPL

Burning Rubber Radio came to life in January of 2008 when Andy DeLay looked at his good friend Charles Robinson and said on a whim, “Let’s start a racing radio show.” Without any formal broadcasting experience whatsoever Andy and Charles approached the local London Kentucky radio station WANV 96.7FM and pitched the station manager the idea. To our amazement, the station manager liked our idea and set us up for our first broadcast. Charles and I showed up for our first show at 7 PM and was shown the control board and microphone. Charles was shown how to throw a few switches to stop the music and buttons to push to patch the phone then said, “Goodbye, make sure you turn the music back on after the show and lock the door when you leave.” Charles and I flew by the seat of our pants and thus began Burning Rubber Radio.
Burning Rubber Radio has come a long way since those days of early 2008. Burning Rubber Radio has welcomed guests such as John Force, Bobby Allison, Bill Elliott, country music stars and even TV personalities from Discovery Channel’s Deadliest Catch and Gold Rush. Burning Rubber Radio has hosted the 2009 ARCA Championship race at Rockingham Speedway, and the First NASCAR Truck Series race there too. The show became part of the Performance Motorsports Network in 2010 and has covered all three of NASCAR’s top touring series, ARCA, The SCCA, IMSA, the IRL, the NHRA, Monster Trucks and the K&N Pro Series East live at the venues.

Burning Rubber Radio today continues to be cutting edge, combining both eMotorsports and real-world racing together into one action-packed hour. We still have all the personalities of real-world racing and now the personalities of eMotorsports. You won’t just find us interviewing drivers, but spotters, crew chiefs, music stars, wrestlers, and anyone else we might get a hold of!